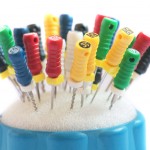 Electronic apex locators (EALs) have used in permanent teeth since the 1960s and they have been gaining in popularity. The use of EALs in the primary dentitions was proposed in 1996. The aim of this review was to compare the accuracy of EALs in primary teeth when compared to actual root canal lengths (ARCLs).

Searches were conducted in PubMed for studies comparing EAL readings with that of ARCLs. Reference lists of included studies were also searched. In vivo and in vitro studies were considered.

Within the limitations of this meta-analysis, it can be concluded that EALs offer an acceptable level of accuracy in the measurement of root canal length in primary teeth. This fact combined with a documented need to minimize radiation in children makes a compelling case for the use of EALs for WL determination in primary teeth.

This review only searched a single database. There is also no indication as to whether the study selections and data abstractions were conducted independently. In addition there is no formal assessment of study quality. The majority of the studies were undertaken in vitro. Consequently while the review suggest that EALs may be useful in primary teeth these results should be interpreted with caution.