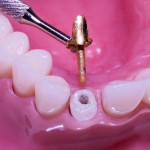 Endodontically treated teeth (ETT) are considered to be more brittle and subject to fracture. Posts are frequently used to restore ETT and use of the appropriate post material is considered important to a successful restoration.  The aim of this review of in-vitro studies was to compare the fracture load of ETT restored with cast of fibre posts in a loading test.

The Medline, Cochrane Controlled Trials Register, China National Knowledge Infrastructure and China Biology Medicine databases were searched for articles in English or Chinese.  Randomised controlled trials conducted on single rooted, caries-free, freshly extracted teeth that had been kept moist before use and had had standardised root canal therapy performed were included.

On the basis of the current best available evidence, we concluded that cast posts had higher fracture resistance than fibre posts

As noted by the authors it is important to note that these results were based on in-vitro trials and although they may provide some indication of performance in the clinical situation this cannot be guaranteed.  The authors also discussed the variation in the testing methods used in the studies, which may have influenced their findings.  The 2008 Cochrane review by Bolla et al looked at the effectiveness of different post and core systems for the restoration of endodontically-treated teeth and concluded.

Last reply was January 15, 2013
Try out our members features!