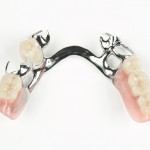 The use of removable partial dentures is a long established approach to replacement of missing teeth. With the increase in use of dental implants their use is considered by many to be a second-choice therapy. However, medical, cost or other clinical contraindication may limit implant use so rehabilitation with dental prostheses still makes up a significant portion of everyday clinical practice.

The aim of this study was to conduct a systematic literature review on the survival rates of removable dental prostheses (RDP) in the moderately reduced dentition.

Two reviewers independently selected the studies for inclusion. Randomised controlled trials (RCTs), prospective and retrospective studies on survival rates of removable dental prostheses in the moderately reduced dentition with at least 15 participants, an observation period of at least 2 years, and a dropout rate of less than 25 % were considered. The primary variables recorded were the survival rates of the restorations and the abutment teeth. A narrative summary of the findings was presented owing to the heterogeneity of patient selection, study designs and measurement criteria.

Given the clinical significance of the topic under analysis, the range of available studies is anything but impressive. Treatment recommendations for treating the partially edentulous arch with removable restorations are not possible at the highest level of evidence. It would be desirable to have access to studies with a standardized and flawless methodology.

Despite an extensive search strategy and including retrospective studies the authors were only able to include a small number of studies addressing this question. All the included studies were conducted in a university or hospital environment and the heterogeneity of the studies and evaluation criteria made comparisons difficult so a narrative summary of the findings was presented. As the reviewers note there is a clear need for common outcome assessment criteria and high quality conduct and reporting of studies in this area.

What is the longevity of removable prosthodontics?