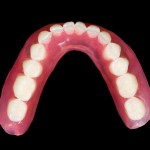 Mandibular overdentures are an effective approach to rehabilitation of the edentulous mandible. Retention can be achieved using splinted or non-splinted attachments. Ball attachments are the most commonly used non-splinted attachment but recently the stud type attachment is becoming more popular as it has been reported to provide a higher retention force and lower incidence of fracture than the ball type.

The aim of this review was to compare the clinical performance and self-reported patient outcomes of ball and stud attachments as mandibular overdenture retainers.

This new review focuses more narrowly on comparing two different retention systems for mandibular overdentures. While a number of new studies have been published since the Cochrane review the quality of the available evidence is limited with almost all the studies being included in the review assessed as being at high risk of bias. For most of the outcomes assessed in the review there was little difference between the two attachment systems. However, for some of the outcomes only a small number of studies were included and the limited quality of the available studies suggest that the findings should be viewed cautiously. As the authors of the Cochrane review and this review has indicated there is a clear need for high-quality well conducted trials in this area. For despite improvements in dental health in many countries there are still significant numbers of  edentate patients who require effective treatments.

Overdentures: The effect of attachment systems on clinical performance