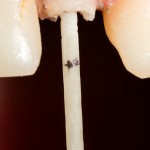 Posts are used to improve the retention of restorations in root filled teeth. Traditionally cast or prefabricated metal posts have been used but fiber posts are now more commonly used. A number of studies have suggested that root fractures are more common with metal posts than fibre with fibre posts also have a better overall prognosis.

The aim of this review was to assess the endodontic and prosthetic complications in endodontically treated teeth restored with fiber posts and single crowns (SCs) or fixed dental prostheses (FDPs).

The included studies were too heterogeneous and scarcely comparable to achieve clear clinical statements; furthermore, to date, a univocal correlation between failure rates of fibre posts and typology of prosthetic restorations (SC or FDP) cannot be found.

Within the limitations of this systematic review and the lack of available clinical data, the majority of failure events were due to post debonding and dislodgements of SCs.

Further clinical data are needed in order to establish a possible correlation between failures and typology of restoration, so as to postulate predictable guidelines in the restoration of endodontically treated teeth.

This review has searched a wide range of databases and only considered RCTs. However than have restricted the included article to those published in English only, which may have an impact on the findings. In an earlier blog (Dental Elf – 26th Nov 2014) we looked at a previous review of this topic. That review had a more restricted search strategy but included a broader ranged of study designs and accepted studies in languages other than English. They included 14 studies 7 of which they classified as RCTs compared with the current review, which only included 4 RCTs. The earlier review suggested that there was no difference between fibre and cast posts in terms of root fractures while the current review considers that the available evidence is too variable to offer clinical recommendations. Given that the earlier review also reported that none of the RCTs were at low risk of bias it seems reasonable to agree with the authors that there is a lack of evidence to provide recommendations for clinical practice and more high quality research is required