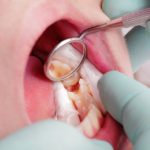 Dental amalgam and resin-based composite are the most common materials used to restore permanent teeth once dental caries has progresses to a stage where it must be restored.   Lining materials have been used since the 19th century to protect the pulp from the toxic effect of some materials and to reduce thermal conductivity. Resin-based composites have a thermal conductivity similar to the natural tooth and there is some debate over whether the use of a liner under this material is necessary.

The aim of this Cochrane review is to assess the effects of using dental cavity liners in the placement of Class I and Class II resin-based composite posterior restorations in permanent teeth in children and adults.

As the authors note in their introduction to this review there is a significant variation in what is taught in dental schools in  relation to the placement of liners under resin-based composites.  The evidence identified for this Cochrane review which as usual is based on an extensive search of the literature is limited to 8 studies.  While the evidence identified is of low quality the authors suggest in their discussion that using a liner is an unnecessary step in routine composite-based restorations in adult posterior teeth.