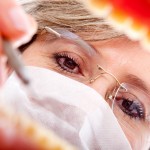 Atraumatic restorative treatment (ART) involves the removal of so softened carious enamel and dentine with hand instruments and filling the cavity with a adhesive restorative material. Typically this is a high-viscous glass ionomer cement (GIC).   This approach was about 25 years ago  to provide care in less industrialised areas with high disease levels but is now being used as part of a minimally invasive approach in more developed countries.   The aim of this review was to assess whether occluso- proximal ART restorations are as successful as conventional restorations in primary teeth in terms of longevity, pulp damage, or caries lesion progression.

A detailed search was conducted in only a single database (PubMed) and the reference lists of identified articles.  Only randomised controlled trials in English were included. An assessment of study quality was undertaken.

As this review does not search two databases it should not really be considered a systematic review.  It could also be considered doubtful that it adds much to an area that already seems to be burdened with a multitude of reviews.  Indeed there are probably now almost as many reviews of this topic as there are trials (see links).  The recent review by Mickenautsch and Yengopal in the online Journal of Minimum Intervention in Dentistry probably has the most extensive search of any of the reviews listed below. This study included 18 trials of which 10 were available for abstraction at the time of publication.  They concluded:-

The current evidence indicates that the failure rate of high-viscosity GIC/ART restorations is not higher than, but similar to that of conventional amalgam fillings after periods longer than one year.

While much has been written about this topic there is little robust evidence, not helped by differences in the interpretation of what ART entails.  Although as the 2009 Cochrane review by Yengopal et al of  dental fillings for the treatment of caries in the primary dentition notes there is also little robust evidence for traditional fillings either, as they concluded:-

It was disappointing that only three trials that compared three different types of materials were suitable for inclusion into this review. There were no significant differences found in all three trials for all of the outcomes assessed. Well-designed, randomised controlled trials comparing the different types of filling materials for similar outcomes are urgently needed in dentistry. There was insufficient evidence from the three included trials to make any recommendations about which filling material to use.

Last reply was September 9, 2013
Try out our members features!