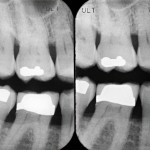 This aim of this review was to review to compile and synthesise the evidence on the use of bioactive glass (BG) as a graft material to treat infrabony defects caused by periodontal disease.

The authors searched PubMed, Embase, and Cochrane Database of Systematic Reviews as well as a manual search of recently published peridontology journals to identify randomized controlled trials (RCTs) of the use of BG in the treatment of intrabony and furcation defects.

Studies published in English with a follow up of ≥6 months with baseline and follow-up measures of probing depth (PD) and clinical attachment levels (CAL) with 95% confidence intervals, and an appropriate control arm were included. Data was extracted and cross-checked by at least two reviewers. Meta-analyses were performed for changes in PD and CAL between experimental and control groups, using the mean change plus SD for each study.

Of Twenty-five studies identified, 15 met the inclusion criteria; they found :-

Treatment of intrabony defects with bioactive glass imparts a significant improvement in both probing depth and clinical attachment level in comparison with both active controls and OFD.