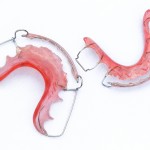 Fixed and removable functional appliances are used in the management of class II malocclusions. The Twin-block consists of upper and lower acrylic bite blocks with occlusal inclined planes that interlock at a 70 degree angle and guide the mandible forward and downward. It is considered that the twin-block is better tolerated by patients. The aim of this review was to evaluate short-term dental, skeletal, and soft tis- sue effects of treatment with Twin-block appliance in comparison to an untreated sample among individuals with a mild-to-moderate Class II division 1 malocclusion.

Searches were conducted in Medline, PubMed, Embase, the Cochrane Library and the Web of Science. Human cephalometric studies with a comparable control group of untreated subjects that used a Twin-block appliance in a non-extraction and non-surgical approach were considered. Study selection and data abstraction was carried out independently by two reviewers. Risk of bias was assessed.

Changes associated with a Class II correction were identified. Most of the changes individually were of limited clinical significance, but when combined reached clinical importance. No long-term changes were available.

Both pro- and retrospective studies are included in this review and retrospective studies have greater potential for bias, which needs to be taken into consideration when looking at the findings. In the discussion the authors highlight that one of the largest studies (assessed as being at low risk of bias) was one of the few that did not find any significant skeletal changes. This review only considered short-term changes. A broader Cochrane review looking at orthodontic treatment for class II malocclusions was recently published (Thiruvenkatachari et al 2013) . That review included 17 randomised controlled trials and suggested that minor beneficial changes in skeletal patterns were seen with functional appliances but they were not clinically significant.  An earlier review by Marsico et al (Dental Elf 20th July 2011) also identified small beneficial changes in skeletal patterns that were not clinically important.