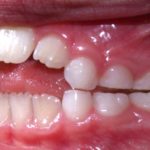 A number of factors are associated with the dentofacial characteristics of the developing child in the early years. Some believe that myoskeletal and myofunctional problems related to swallowing patterns, tongue position oral habits and breathing patterns are the consequence of malocclusion which other are of the view that the functional and environmental equilibrium of a structure is the primary cause for the dentoalveolar and dentoskeletal relationships.  A number of myofunctional treatment protocols have been suggested for resolving orofacial dysfunction and myoskeletal problems.

The aim of this review was to assess the effect of early orthodontic management and orofacial muscle training protocols in the developing dentition, on (a) anterior open bite correction, as well as on (b) normalization of the patterns of mouth breathing, (c) swallowing and (d) tongue resting position and pressure.

A single reviewer extracted data for checking by a second reviewer with risk of bias being assessed by two reviewers independently using with the Cochrane tool. Standardised mean differences (SMDs) and 95% confidence intervals (CI) were calculated for cephalometric measurements and random effects meta-analysis conducted.

The reviewers have carried out a search of a number of databases to identify studies to address this question. However, because of the limited number of studies identified, the range of interventions and the low quality of the available studies the findings should be viewed cautiously.

In relation to the treatment of anterior open bite whilea number of systematic review are available, including a Cochrane review, all highlight the weakness of the available evidence.

Anterior open bite might be corrected with crib therapy

By Giorgio Fiorelli at the English language Wikipedia, CC BY-SA 3.0,