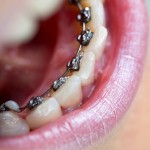 The aim of this review was to assess if there are differences in treatment effects between labial and lingual fixed appliances?

Randomised controlled trials (RCTs), prospective controlled trials (CCTs) and retrospective studies comparing changes in the cephalometric values of patients with malocclusions requiring orthodontic treatment where one group were treated with lingual technique and the other group a buccal technique. Two reviewers selected studies and assessed the risk of bias independently using the Cochrane tool or the Newcastle-Ottawa Scale. Meta-analysis was conducted using a random effects model.

The present systematic review found no statistically significant cephalometric differences between the lingual and labial orthodontic techniques. However, there was a tendency to increase the interincisal angle and reduce the angle between the major axis of the upper central incisor and the sellar-nasion plane. These findings indicate that treatment with lingual appliances favours incisor tip- ping by exerting lingual crown torque. However, because of the small number of included studies, the results of this meta-analysis should be interpreted with caution.

This review has undertaken a good search of 3 major databases supplemented it by hand searches of specific orthodontic journals and not restricted the publication dates or languages. However, only 4 studies were identified with the only RCT being considered to be at high risk of bias. The meta-analysis included one of the CCTs and the retrospective study involving just 169 patients. This focused on 6 angles and distances finding no significant differences between lingual and buccal approaches.  An earlier review conducted by this by this group suggested that more adverse events were seen using a lingual approach (Dental Elf – 21st Jun 2016).

While this review brings together the available studies on this question they are limited in number, size and quality, consequently the findings should be interpreted cautiously.