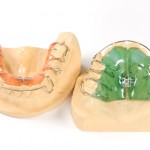 The aim of this review was assess the effectiveness of functional appliances on mandibular growth in the short term.

Functional appliances consist of a range of removable and fixed devices that are designed to alter the position of the mandible, both sagittally and vertically, with the aim of inducing supplementary lengthening of the mandible by stimulating increased growth at the condylar cartilage.

The electronic databases PubMed, Embase, Ovid Medline, Cochrane Central Register of Controlled Trials, Web of Science, LILACS, and Google Scholar were searched for randomised controlled trials. Reference lists of the retrieved articles were hand-searched and no language restrictions were applied. The selection process and the quality assessment were undertaken independently and in duplicate by two authors. A meta-analysis was attempted by using random-effects models. Clinical and statistical heterogeneity was examined, and a sensitivity analysis was performed.

Four articles, based on data from 338 patients (168 treated vs 170 controls) with Class II malocclusion in the mixed dentition, were selected for the final analysis. The quality analysis of these studies showed that the statistical methods were at the medium-high level.

This meta-analysis showed that, when functional appliance treatment is provided in early adolescence, there are small beneficial changes in skeletal patterns, but these are probably not very clinically significant.

Last reply was October 25, 2011
Try out our members features!