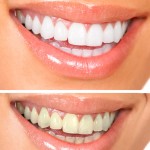 The modern trend for tooth whitening has become popular since 1989 when nightguard vital bleaching was described. Since then a range of bleaching techniques for use in the dental clinic, or at home have been in use. A wide range of over-the-counter (OTC) whitening products are also available, including gels, rinses, gums, dentifrices, whitening strips, and paint-on-films. However, not all of these products are available in all markets e.g. strips are no longer available in Europe. The aim of this review was to compare the efficacy and safety of over-the-counter whitening strips to the ADA-recommended home-bleaching technique using 10% carbamide peroxide gel.

There is no sound evidence in dental literature to suggest that the ADA-recommended whitening technique based on 10% carbamide peroxide gel could be substituted by the whitening strips. Well-designed studies are required to attest the efficacy and safety of this over-the-counter technique, especially due to the odds of improper use of these products without further professional monitoring. These studies should also consider the patient acceptance to the whitening treatment as a relevant outcome.

The included studies demonstrated a high degree of heterogeneity and the authors considered that the two most likely sources were the concentration of the whitening strips and the total contact time for the whitening agents. 7 out of the 9 studies included in this review were funding by the manufactures and the author’s assessment of the overall quality of the available evidence using the GRADE criteria was very low.

There is evidence that whitening products work when compared with placebo/no treatment. There are differences in efficacy between the products, mainly due to the levels of active ingredients, hydrogen peroxide and carbamide peroxide. All trials were however short term and the majority of the studies were judged to be at high risk of bias and were either sponsored or conducted by the manufacturers. There is a need for pragmatic long-term and independent clinical studies that include participants representing diverse populations. There is also a need to evaluate long-term harms. Several studies reported (where measured) the common side effects of tooth sensitivity and gingival irritation, and people should be informed of this.