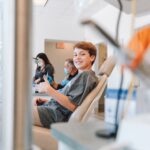 Children with autism spectrum disorder display behaviours such as unresponsiveness to commands, a lack of concentration and sometimes aggressiveness, which can make dental treatment challenging. Studies have found that children with autism spectrum disorder (ASD) have poorer oral health compared to those without ASD. This is attributed to difficulties in carrying out oral hygiene, as well as challenges in accessing dental care and a lack of knowledge amongst dental staff about how to provide dental care for children with ASD. Behaviour management techniques and pharmacological interventions may be used by the dental team to safely deliver dental care.

The aim of this systematic review was to evaluate the effectiveness of behaviour management and modification strategies for children with autism spectrum disorder to overcome the anxiety and discomfort associated with receiving dental care in a clinical setting.

This review was conducted in accordance with the guidelines of PRISMA and received approval by a research ethics committee. Searches were conducted in four electronic databases (Scopus, Web of Science, PubMed and Cochrane). Grey literature was also searched in Google Scholar and via hand search of the reference lists of the included studies. Medical Subject Headings (MeSH) were used to identify articles and there was no time limit set in the search. Included studies were written in English and behavioural scales or cooperation ratings were used to report the impact of the intervention. Two researchers reviewed the literature and any disagreements were discussed with a further three researchers. In non-randomised controlled studies (NRS), risk of bias was evaluated using ROBINS-I (Risk Of Bias In Non-randomised Studies of Intervention) and in randomised controlled trials (RCTs), ROB-2 (version 2 of the Cochrane Risk-of-bias tool) was used. The main outcomes were determined by improvement in the child’s co-operation, improvement in behaviour and a decrease in dental anxiety.

This systematic review provided current available approaches yet inconclusive evidence on the effectiveness of the psychological approach for managing children with ASD at dental setting.

The presence of ASD can create challenges in providing dental care to affected children. Behaviour management techniques can help to assess and deliver dental treatment, thus reducing or avoiding the use of pharmacological techniques (such as conscious sedation and general anaesthetic) and their associated risks. Behaviour scales, such as the Frankl scale and the Venham scale, can be used to measure behaviour and dental anxiety to help assess the effectiveness of interventions. Although improvements were seen with techniques, such as visual pedagogy, TSD and the TEACHH approach, the included studies had small sample sizes, several lacked control groups and the majority of studies were at high risk of bias. An improvement in the design of future studies, alongside better randomisation and bias control will lead to more robust evidence on the use of behaviour management techniques for children with ASD.

Photo by Nate Johnston on Unsplash