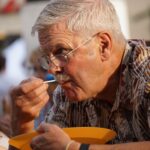 The world’s population is ageing, and the proportion of people aged 60 years and over is increasing faster than other age groups. The global increase in the number of older adults will lead to a rise in the need for health and social care which is likely to be accompanied by an increased need for care in long term care facilities. During the ageing process, the oral and facial structures and soft tissues change, and this can result in a reduced ability to chew effectively. Such age-related changes include tooth loss, atrophy of masticatory muscles and decreased salivary flow.

The aim of this systematic review and meta-analysis was to observe the prevalence of chewing difficulty in older people in institutional long-term care.

The systematic review was conducted in accordance with the guidelines of PRISMA. Searches were conducted in six electronic databases (Embase, PubMed (including Medline), Latin American and Caribbean Health Science Literature (LILACS), LIVIVO, Scopus and Web of Science). Grey literature was also used through Google Scholar and OpenGrey. A PECOS (population, exposure, control, outcome) framework was used for the inclusion criteria; which included people over 60 years of age in institutional long-term care. Chewing difficulty was assessed through questionnaires or objective assessment of older adults.

The following limitations of this review should be pointed out: the synthesis was based only on cross-sectional studies; the questionnaires were heterogenous; and, in some studies, it was not reported in detail who had applied them. Furthermore, the data available in the literature are from only a few countries, making it difficult to generalise the findings more widely.

The result of the meta-analysis show that the prevalence of chewing difficulty in older adults in long term institutionalised care is 23% (when studies with an adequate sample size were included). The use of questionnaires in some studies presented a high risk of bias. The authors acknowledged that, in most studies, the questionnaires did not use objective criteria and were heterogenous. Therefore, the certainty of the evidence was considered very low.

A reduction in the ability to chew effectively can have a profound effect on an older adult’s wellbeing. It can affect nutritional status as older people may opt for foods that are easier to chew but are often less nutritious. The increase in multimorbidity that accompanies ageing may contribute to chewing difficulty; for example, xerostomia may occur (as a result of polypharmacy) leading to the inability to form a food bolus. Furthermore, the facial appearance can change leading to a reduction in psychological well-being. With a rapidly increasing ageing population requiring care in long term care facilities, the importance of research in this area has never been greater. Challenges facing research in long term care facilities are vast; from issues with informed consent to the facilitation of research by care home staff. Studies with increased sample sizes and a more homogenous and standardized approach to assessing chewing function in older adults are required to produce higher quality evidence.

Photo by Beth Macdonald on Unsplash