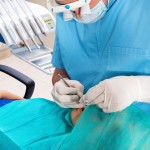 Fibrous hyperplasia can be found in any part of the mouth and are thought to affect between 5-16% of the population. They commonly present as small painless lesions and are frequently the result of trauma from an ill fitting denture. Traditionally they are removed with a scalpel but with the increasing use of surgical lasers for oral lesions. The aim of this study was to compare the effects of diode laser surgery with conventional techniques using scalpels.

Consecutive oral medicine patients presenting with fibrous hyperplasia caused either by dentures or by parafunctional habits were randomised to either conventional surgical removal (control) or 808nm diode laser removal (test). The same local anesthetic agent (2% lidocaine and adrenaline at 1:100,000) was used for both group but the test group also received topical anaesthesia. While suturing was used to close the wound in the control group, no suturing was undertaken in the test group. Paracetamol was prescribed for postoperative pain relief.

This small study suggests that that while diode laser treatment was marginally quicker and required fewer analgesics and no sutures there was more swelling and wound healing was longer. In terms of assessing the wound healing, it is not clear whether this was undertaken by operator and owing to the different wound characteristics. It would have been difficult to blind an observer particularly during the early stages of healing, so the possibility of bias presents a fact noted by the authors. Additional studies are needed to confirm these findings.