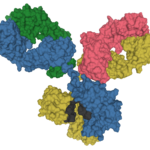 SARS-CoV-2, the virus which causes COVID-19 results in seroconversion of most patients between 7 to 14 days after diagnosis.  A study of 61,000 persons in Spain showed that 5% of the population had formed antibodies against the spike and nucleoproteins and that approximately one third of infected persons were asymptomatic. The infection fatality risk has been reported to range between 0.66% (China) to 0.4% (small German town) and 0.6% (Diamond Princess Cruise ship).

The aim of this study was to assess SARS-CoV-2 seroprevalence in the population of Iceland and to assess longitudinal changes in antibody levels within the first 4 months after SARS-CoV-2 infection.

The authors screened for SARS-CoV-2 reactive serum antibodies using six different assays in two groups of quantitative polymerase chain reaction (qPCR) positive persons and six groups of persons who had not been tested with qPCR or who had been tested and received negative results.

SARS-CoV-2 specific antibodies were measured in up to 30,676 persons with assays targeting pan-immunoglobulin (pan Ig: IgM, IgG and IgA) and specific immunoglobulin against virus nucleoprotein and receptor binding domain in the S1 subunit of the spike protein.

…Antiviral antibodies against SARS-CoV-2 did not decline within 4 months after diagnosis. The risk of death from infection is estimated to be 0.3% and 44% of persons infected with SARS-COV-2 in Iceland were not diagnosed by qPCR.

This substantial population study assessed 30,657 persons living in Iceland and evaluated the value of viral serum antibodies and its correlation with qPCR results. The findings provide insight into the interpretation of antiviral antibodies as they did not decline 4 months after infection. Other studies have demonstrated that 89% of COVID-19 infected healthcare workers carry neutralising antibodies up to 16-18 weeks post-infection however there were variable T-cell responses across the viral proteome which this study did not explore (Reynolds et al 2020). The limitations of current qPCR testing were discussed as 44% of persons infected with the virus were not diagnosed using this method in Iceland. Similar false negative rates (up to 54%) are described in other studies (Arevalo-Rodriguez et al 2020). There is more research required on the relationship between seropositivity and protection against reinfection, especially once detectable antibodies levels decline. There is rapidly emerging evidence evolving our understanding of both the disease and its management, therefore the most updated research should be used to inform clinical practice.