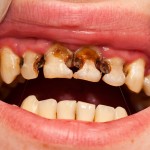 Dental caries presents as a continuum from subclinical changes in tooth to dentinal involvement and tooth destruction. While the early stages are asymptomatic, symptoms start with dentinal involvement and if untreated may cause severe pain and infection. While caries experience has declined in many countries over the past 40 years individuals are susceptible throughout life. The aim of this review was to report internally consistent prevalence and incidence estimates of untreated caries for 187 countries, 20 age groups, and both sexes for 1990 and 2010.

The Medline, Embase, and LILACS databases were searched. Two reviewers independently selected studies and extracted data. Study quality was assessed. The Global Burden of Disease (GBD) case definition of untreated caries was “teeth with unmistakable coronal cavity at dentine level, root cavity in cementum that feels soft or leathery to probing, temporary or permanent restorations with a caries lesion”. The untreated caries database was modeled using DisMod-MR, a Bayesian meta-regression tool developed for the GBD 2010 study. Untreated caries in primary and permanent teeth were modeled separately.

This review was undertaken as part of the 2010 Global Burden of Disease (GBD) study and follows the methodology developed for that study.   In their discussion the authors highlight methodological issues in relation to reporting of caries data that could have an impact on their findings. They note that no data is available from some countries and that in some locations studies included non-population based, convenience or non-random samples of focused on patients in specific group or institutional settings.

However, overall the study does provide a global snap shot of the significant public health challenge that dental caries still presents even in developed countries. Caries is considered to be the 4th most expensive disease to treat and figures for treatment of dental disease presented in the paper suggest and annual spend of $122 billion dollars in 2014.