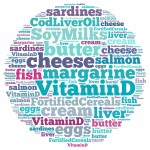 A link between vitamin D and dental caries was suggested back in the 1920s as it has an important role in calcium and phosphate metabolism.  The aim of this study was to review the available trial data on supplementation with vitamin D for dental caries prevention compared with no such supplementation, in any population.

….this systematic review of CCTs suggests that vitamin D exposures in early life may play a role in caries prevention.

There is currently an increase in interest in Vitamin D in health care, but the majority (22 out of 24) of the studies included in this review were published 60 years ago and even the most recent is now 20 years old.  At that time caries prevalence was higher in most populations and as noted by the reviews author;

differences in nutrition, fluoride exposures, and lifestyle factors make inferences from one time era to another tenuous.

Publication bias was detected suggesting that negative studies were not reported; this could have an important impact, as could the overall quality of the included studies.  The included studies showed significant heterogeneity with the author noting that by eliminating the CCTs at higher risk of bias there was a reduction in the I2 heterogeneity test from 72% to 49%.  It would have been interesting to indicate what impact this had on the overall relative risk presented. Although, the meta-regression performed to look at study characteristics suggested that low quality studies decreased the effectiveness of vitamin D!

A 2004 review of caries risk factors in children by Harris et al, which only included studies from 1966 onwards, identified some 106 factors associated with caries. They identified 29 dietary factors but did not include vitamin D.

Last reply was February 3, 2016
Try out our members features!