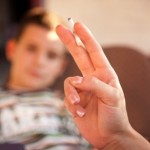 There has been much discussion in the UK about the possibility of banning smoking in cars when children are present.  This latest summary from the ADA-EBD looks at a 2011 systematic review by Hanioka et al that considered the possibility of a link between second hand smoke (SHS) and dental caries that we first highlighted in 2011 (Dental Elf 26th June 2011)

The commentator notes that the review was well conducted although restricted to studies in English, including one cohort study and 14 case-control studies.  Much of the data was collected by surveys and only one study used an objective measure of SHS. The commentator highlighted that many of the studies did not adjust for variable associated with caries.   In addition, while a number of proposed mechanisms linking SHS with caries are suggested eg, influencing oral flora, vitamin C and cadmium levels , it may be simply that SHS is a marker for low socioeconomic status which is a risk factor for caries.