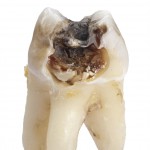 The use of topical fluoride together with  fluoridated water and fissure sealants are mainstays of caries management.  A range of non-fluoride agents  caries preventive agents are also in use and these are reviewed to provide  evidence-based clinical recommendations. The authors evaluated studies of sucrose-free polyol chewing gums, xylitol dentifrices, chlorhexidine, chlorhexidine in combination with thymol, calcium-containing agents, phosphate-containing agents, casein derivatives, sialogogues, iodine and triclosan. Vaccines, genetically modified Streptococcus mutans, probiotics, and lasers, ozone and other mechanical devices were not within the scope of the review

The review was authored by a a multidisciplinary panel of subject matter experts convened by the American Dental Association (ADA) Council on Scientific Affairs (CSA) . They considered two clinical questions:-

They searched MEDLINE and the Cochrane Library from 1966 through April 9, 2010 and identified  2697 articles. 71 articles describing  50 randomized controlled trials (RCTs) and 15 non-randomized studies were included.

.. that certain non-fluoride agents may provide some benefit as adjunctive therapies in children and adults who are at higher risk of experiencing caries. The panel found at least 10 ongoing clinical trials that may in the future provide additional evidence for or against the effectiveness of many of these modalities. Therefore, on the basis of available evidence, the panel recommended sucrose-free chewing gum (containing either only or polyol combinations) or xylitol lozenges for caries prevention. In addition, the panel found that a 1:1 mixture of chlorhexidine/thymol varnish may be efficacious in the prevention of root caries. The panel will update its recommendations when information from ongoing clinical trials becomes available.