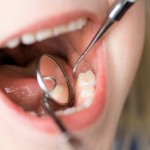 Early childhood caries (ECC) is  a common chronic childhood disease and a serious concern for child welfare.  In the USA its incidence has increased from 24% to 28%  in recent decades.  The aim of this study  was to  compare an intensive early intervention caries prevention strategy against a more limited control intervention.

At 4 months postpartum mother-child dyads  were randomised to either the  intervention or control.  The intervention arm received chlorhexidine (CHX) mouthrinse for 3 months beginning 4 months postpartum and children received fluoride varnish (FV) every 6 months from age 12–36 months.  The control group received FV if precavitated lesions developed.  Both groups received oral health counselling.   Mothers’ salivary mutans streptococci (MS) and lactobacilli levels were assessed  together with caries incidence in the children at 36 months.

Maternal postpartum CHX regimen, oral health counselling and preventive child FV applications were not more efficacious than maternal counselling with child therapeutic FV for precavitated lesions for ECC prevention. FV for young children with brief maternal CHX use and oral health counselling may need to be combined with additional or longer-term therapies to significantly reduce ECC in high-risk populations.