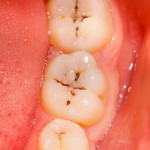 Dental caries is one of the commonest diseases in the world and while a range of adjunctive caries detection devices have been developed visual inspection remains the primary method of detection. However,  visual detection can be subjective and examiners can be inconsistent in their interpretation of the clinical appearance of carious lesions.  The aim of this review was to determine the overall diagnostic accuracy of visual detection for dental caries in primary and permanent teeth.

Searches were conducted in the PubMed, Embase, Scopus and OpenSIGLE databases, supplemented by searches of of IADR/ AADR (International and American Associations for Dental Research), and ORCA (European Organisation for Caries Research) congresses for unpublished literature.

Visual inspection presents good accuracy in the detection of carious lesions in primary and permanent teeth, with a trend for higher specificity than sensitivity. Importantly, the use of detailed and validated methods improves the accuracy of visual inspection for caries.

The majority of the studies included in this review are laboratory-based studies an issue raised by the author, and this may have implications for how these findings are translated into clinical practice. They point out that the overall accuracy was similar in the clinical and laboratory based studies although they did note a trend for higher specificities and lower sensitivities in the clinical studies. While higher sensitivities are normally obtained at the expense of reduced specificity higher specificities (ie a lower number of false positives) is considered preferable in a normally slowly progressing disease like caries. The authors recommend that visual examination for caries is used without adjuncts and strongly encourage using a well-established visual scoring system, as this does appear to improve accuracy.