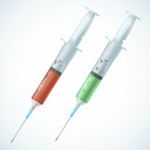 Antipsychotic non-adherence rates are reported to be as high as 75% by some studies (Byerly et al, 2007). Though side effects are often the main reason for this, cognitive impairment and chaotic lives also made it harder for patients to take the tablets which can provide them some symptomatic benefit.

Depot (long-acting injectable) medications can be a solution to some of these problems. They are administered at intervals of weeks or months and neither the care team nor the patient have to worry about missed doses. The evidence is hazy but some studies suggest that depots could actually work better than tablets too (Goff, 2014).

Some of the older ‘typical’ antipsychotics have been around in depot form for decades, but since 2003 several of the newer ‘atypical’ antipsychotics have been marketed in long-acting injectable form as well. Risperidone was the first, but it needs to be given every two weeks and has to be kept refrigerated. Paliperidone palmitate, a metabolite of Risperidone, followed in 2009 with significant fanfare due to a supposed relative lack of side effects. It could also be given in monthly doses and didn’t need to be kept cool, but a price-tag of $1,000 per injection made it far from perfect.

At $35 per injection, the older Haloperidol decanoate depot is far cheaper, so it would be worthwhile knowing how it measures up to the flashy new kid on the block, Paliperidone, in terms of side effects and symptom benefit. Fortunately, a recent RCT in JAMA examines just this question. ACLAIMS (A Comparison of Long-acting Injectable Medications for Schizophrenia) was a between-groups, double blind, randomised clinical trial conducted over 22 sites in the US.

The exclusion criteria were:

Patients were enrolled into one of two groups:

Patients went through an initial trial phase of 4 to 7 days during which they took the oral equivalent of their medication to ensure they would not react aversely to it.

Benztropine was available to both groups if extra-pyramidal side effects occurred.

The treating clinicians were blind to which drug was being given; they wrote prescriptions for both. If they felt treatment should continue despite certain risks (new onset diabetes, weight gain, high LDL cholesterol, tardive dyskinesia, admission to hospital, deterioration on the CGI), permission from a safety officer had to be sought.

The primary outcome was:

Only patients who had at least one injection and underwent at least one set of post-baseline measures were included in the primary analysis, as a modified intention-to-treat population.

311 of the 353 patients assessed for eligibility were assigned to one of the two groups (154 for Paliperdone vs 157 for Haloperidol). 147 patients in each group received at least one injection, but 2 from each group did not attend for their first set of post-baseline measures, so 145 from each group were included in the primary analysis.

Similar numbers of patients discontinued treatment in each group (104 in the Paliperidone group vs 101 in the Haloperidol group) due largely to participant decision, inadequate therapeutic effect or adverse effects. 68 patients prematurely withdrew from the Paliperidone arm of the trial and 62 from the Haloperidol group due largely to withdrawing consent or being lost to follow-up.

There were no obvious differences between the two groups at baseline in terms of age (43 vs 45 years), gender, illness type or severity (schizophrenia in 71 vs 73% of cases), physical health or previous antipsychotic treatment (age of first antipsychotic prescription 26 vs 27 years old).

There was no statistically significant difference in terms of the primary outcome measure, efficacy failure (33.8% for Paliperidone versus 32.4% for Haloperidol). The most common reasons for failure were readmission to hospital and clinician discontinuation due to inadequate therapeutic effect.

Decreases in PANSS scores were similar in both groups at each timepoint (at 6 months for example, -6.87 vs -6.40).

There were no statistically significant differences between the two groups in terms of HbA1c, glucose, cholesterol or triglycerides. Neither was there a difference concerning rates of tardive dyskinesia or abnormal involuntary movements.

Rates of sialorrhea were significantly higher in the Paliperidone group (16.3 vs 10.9%), the only subjectively reported side effect with more than 5% difference between the groups.

This relatively large and pragmatic study provides firm evidence that the newer antipsychotic, Paliperidone, is no better at preventing relapse or controlling psychotic symptoms than its decades-old comparator, Haloperidol.

Predictably, the drugs do differ in their side effect profiles. Paliperidone leads to weight gain and higher prolactin levels (but not, in this study, more diabetes or other metabolic derangements). Haloperidol leads to more akathisia and use of other drugs to control parkinsonism.

This is further evidence for the practice of choosing an antipsychotic based on the least risky side-effect profile for a particular patient. The far higher price tag of Paliperidone ($1,000 vs $35 per injection) should be a strong influence on the clinical decision too. The usual critiques of an antipsychotic RCT apply to this paper:

Also, the persistent use of such hard surrogate endpoints (readmission, crisis) for treatment failure underestimates the complexity of psychotic illnesses and the patients who suffer from them. We should be more subtle in our measurements of a treatment being unsuccessful and not consign people to having ‘failed’ after one blip. There were no measures of patient experience or satisfaction, which is a dismaying oversight. Patient preference is one of the most important measures for any treatment we offer.

In addition, the primary outcome measure of “efficacy failure” as judged by a blinded panel of psychiatrists seems highly subjective and nebulous.

Finally, I personally believe that without adequate social and psychological care, it doesn’t matter what antipsychotic you put your patient on – they’re going to relapse and every drug will look similarly mediocre. We shouldn’t forget that when we obsess over prescription options.