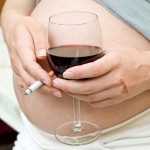 Substance use during pregnancy is common. In national prevalence surveys, 14% of Canadian women reported using alcohol during their last pregnancy, and 17% reported smoking during pregnancy. The prevalence of illicit drug use among Canadian women of childbearing age is less but not insignificant. In United States population surveys, around 5% of pregnant women reported [read the full story…]