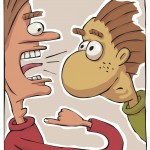 Despite what you read in the tabloid press, the vast majority of people with mental health problems are not violent. However, when violence does occur in hospitals, it’s important that healthcare professionals know how to manage the situation.

This new systematic review has been conducted by a team of Italian researchers who searched a range of databases for studies on aggression and violence in psychiatric inpatient settings, going back to 1990. They excluded studies of selected samples such as a specific psychiatric diagnosis other than psychosis, adolescents or the elderly, men/women only, personality disorders and mental retardation.

They list the variables most frequently associated with violence and aggression in the 66 studies they found:

They found weaker evidence for the following characteristics being generally associated with violence and aggression:

12 studies looked specifically at patients with psychosis and these found that the following factors were most frequently associated with aggression and violence:

Harmony among staff (a good working climate) seems to be more useful in preventing aggression than some of the other strategies used in psychiatric wards, such as the presence of male nurses.

There have been many guidelines and reviews dealing with the management of violence in psychiatric settings. Two key resources are listed below although it’s worth noting that both of these were published in 2005 and are therefore due to be updated in the near future:

Last reply was June 2, 2013
Try out our members features!