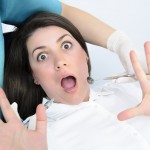 Patients reporting fear and avoidance of dental injections were recruited through newspaper advertisements in the communities of 8 participating dental practices. Patients completed a baseline assessment using the following measures; Modified Dental Anxiety Scale (MDAS); Dental Fear Survey (DFS); The Needle Survey (NS). They were then randomised to either CARL or pamphlet intervention. On completion of either protocol, participants again completed the MDAS; DFS & NS measures and were offered the opportunity to receive an optional dental injection. Patients received a $10 gift voucher for completing the baseline evaluation and on completion of the protocol

CARL, a computerised therapeutic protocol, was successful in reducing self-reported dental fear related to dental injections compared with an informational standard of care. Since CARL does not require involvement by trained therapists or special training for dentists, it may increase access to this therapeutic approach to a wider proportion of the population, improving access to dental care and better oral health overall.

More details of the CARL program are provided in an appendix to the article. It takes place in a session of up to 45 minutes and includes 9 video segments an the opportunity to ask a dental staff member about issues reviewed in the CARL program.  In the discussion the authors highlight another online programme the FearFighterTM Panic and Phobia Treatment modality which has been endorsed by NICE (National Institute for Health and Care Excellence).

It is worth noting that only 21% patients originally randomised returned for the optional dental injection which as the authors indicate is a significant outcome of interest in this type of study.  It would be interesting to see the CARL program compared to another therapy rather than a pamphlet.

FearFighter for panic and anxiety