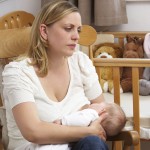 Postnatal (or postpartum) depression is moderate to severe depression that affects women just after they have given birth. It’s a relatively common illness, affecting 7-15% of childbearing women.

Suffering from depression in the first few weeks of motherhood can have a significant impact, not just on the health of the mother, but also on her relationship with her new child and the neurodevelopment of the baby.

A new study in the Annals of Family Medicine looks at ways in which we can improve the diagnosis and management of postnatal depression. The research is a cluster randomised controlled trial involving 28 primary care practices in the US. The practices were randomised, so half of them continued with their usual care and the other half delivered a new practice-wide intervention involving screening, diagnosis, evaluation and management of postnatal depression. Staff in the practices delivering the new intervention were trained and given tools and resources to help with patient follow-up. The intervention was specifically designed to maintain most of the care within the local practice, reserving referral for complicated cases or unresponsive depression.

The primary outcome (a reduction in postnatal depression) was measured with two self-report checklists:

There are a couple of key limitations worth highlighting: