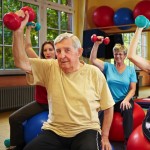 Depression is a common problem in older adults with some data suggesting significant symptoms are present in over 40% of nursing home residents (Teresi, 2001). Clearly physical exercise has a number of benefits particularly with regards to cardiovascular health.

Some of you may remember the Mental Elf blog back in September 2012 with positive results from a systematic review looking specifically at exercise for depression in older people.

Given the medical comorbidities in this population and risks associated with polypharmacy, looking at effectiveness of non-pharmalogical interventions is important.

The Lancet have recently published the OPERA (Older People’s Exercise intervention in Residential and nursing Accommodation) study. This cluster randomised controlled trial led by a team at Warwick University, compared symptoms of depression (baseline and 12 month follow up) in an intervention group of care homes receiving a structured moderate intensity activity programme with a control group. 180 care homes in the Coventry and Warwick region and in North East London were approached to take part in the study. A total of 73 homes with between 16 and 70 beds were included. All participants were over the age of 65 and permanent residents. Inappropriate residents were excluded (acute or terminal illness, recent bereavement, communication problems).

The primary outcome measured was Geriatric Depression Scale-15 (GDS-15) score. This was assessed at baseline and 12 months following randomisation for all participants (overall cohort). The team decided on differences in GDS of 1.2 points to be clinically important.

Patients who were depressed at baseline (depressed cohort), also had the GDS-15 repeated at 6 months post randomisation. A cross-sectional analysis was also carried out (prevalence of depression amongst all participants resident in a study home at 12 months). The bottom line from the study was:

We identified no statistically significant, or clinically important, between-group differences in the GDS-15 score.

We identified no evidence that our intervention had a positive effect on any of our carefully selected primary or secondary outcomes. This evidence does not support the use of this type of intervention to reduce the burden of depressive symptoms in residents of care homes, and alternative strategies for this common and important problem are needed. So this particular exercise programme doesn’t seem to help with depression, but other activities are no doubt on the cards

This is a well designed study with a good number of participants and I think it is useful in that it shows that the particular package studied was not effective in this population. The value of a non-pharmacological intervention which improves depressive symptoms in this group is undeniable and I believe the area warrants further study.

The interventions looked at in the systematic review mentioned earlier (Teresi, 2001), were exercise between 3 and 5 times a week and it may be that the frequency of group sessions was not high enough to have an effect, however such a high intensity programme may not be so attractive to elderly care home residents.