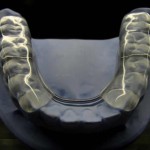 Randomized controlled trials have previously  addressed the efficacy of mandibular advancement devices (MADs) in the treatment of obstructive sleep apnoea (OSA).  The control used in these studies is usually nasal continuous positive airway pressure (nCPAP). It is frequently found to be superior to MAD therapy. In most of these studies nCPAP was titrated objectively but not MAD.  To enable an unbiased comparison between both treatment modalities, the MAD should be titrated objectively as well.

The aim of the present study was to compare the treatment effects of a titrated MAD with those of nCPAP and an intra-oral placebo device.

Sixty-four mild/moderate patients with obstructive sleep apnoea (aged 52.0 +/- 9.6 years) were randomly assigned to three parallel groups: MAD, nCPAP and placebo device.  Two polysomnographic recordings were obtained for all patients: one before treatment and one after approximately 6 months of treatment.

There is no clinically relevant difference between MAD and nCPAP in the treatment of mild/moderate OSA when both treatment modalities are titrated objectively.