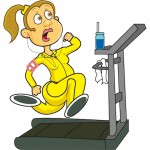 Back from my 5-mile run around the woodland yesterday morning I sat down to catch up on the latest elf stories.

Many of the national newspapers reported on a new randomised controlled trial published in the BMJ, which studied ‘facilitated physical activity’ for people with depression.

The headlines seemed to be in agreement:

Anyhow, this all came as a bit of a surprise to me.  I’ve always thought that exercise was a good thing and certainly something that people with poor mental health should be encouraged to take up.  I always feel invigorated and ready for the day after my early morning Chariots of Fire shenanigans.

What’s more, there has been a lot of evidence published (even in the last few months) supporting the links between physical exercise and good mental health, so what’s going on?

Looking at the paper in the BMJ I see that the research was conducted in general practices in Bristol and Exeter.  361 adults with depression were randomised to one of two treatments:

The outcomes of interest were:

The addition of a facilitated physical activity intervention to usual care did not improve depression outcome or reduce use of antidepressants compared with usual care alone.

Now is it just me or is this a long and winding road away from ‘exercise doesn’t help with depression’?

Us elves have a lot of sympathy for health writers. Most of the articles I read yesterday were actually very balanced and well informed.  As usual it was the headline writers who got it wrong; trying to grab your attention and sell some newspapers!