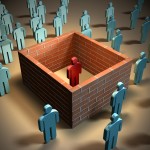 Criteria to identify subgroups experiencing an at-risk mental state (ARMS) have been developed and are widely adopted internationally, but this has fueled recent debates about unintended stigmatising consequences of identifying and providing treatment to people at risk of psychosis.

While the Early Detection and Intervention Evaluation 2 (EDIE-2) trial has shown that cognitive therapy (CT) showed some benefits in reducing the severity of psychotic symptoms in people at high risk, it has been argued that it might also have the undesirable effect of unintentionally increasing internalized stigma within this population.

In a recent study published in the British Journal of Psychiatry, Morrison and collaborators rely on a secondary analysis of data from the EDIE-2 trial to test whether cognitive therapy is more efficient than symptom monitoring for reducing internalized stigma in young people with ARMS.

Internalized stigma was assessed with two subscales of the Personal Beliefs about Experiences Questionnaire (PBEQ):

Analysis were conducted intent-to-treat, using a repeated measures model with random effects, meaning all randomised participants were included in the analysis, with the assumption data was missing at random. Cognitive therapy for people meeting ARMS criteria reduces negative appraisals at 12-24 months follow-up. However, the differences between CT and mental state monitoring alone for negative appraisals were only present at 12 months, vanishing  completely by the end of the trial.

Perceived social acceptability proved less amenable to change in both groups, possibly due to the fact such appraisals are more deeply rooted in the larger cultural context rather than just internally generated. The authors speculate that:

A certain level of caution about disclosure of psychotic experiences in the current cultural environment may be adaptive, given the extent of prejudice and discrimination.

These results suggest that concerns that the provision of cognitive therapy to people at risk of psychosis may be contraindicated or harmful on the basis of increasing internalised stigma are unfounded.