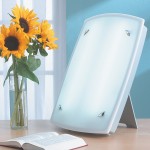 Major depressive disorder is a prevalent and debilitating condition in elderly patients. It is accompanied by circadian rhythm disturbances associated with impaired functioning of the suprachiasmatic nucleus, the biological clock of the brain. Circadian rhythm disturbances are common in the elderly. Suprachiasmatic nucleus stimulation using bright light treatment may, therefore, improve mood, sleep, and hormonal rhythms in depressed elderly patients.

This double-blind, placebo-controlled randomised controlled trial investigated the efficacy of bright light treatment in elderly patients with major depressive disorder.  The setting for the trial was home-based treatment in patients recruited from outpatient clinics and from case-finding using general practitioners’ offices in the Amsterdam region.

The study randomised 89 outpatients (who all had major depressive disorder and were 60 years or older) to either:

Patients were assessed at baseline (T0), after 3 weeks of treatment (T1) and 3 weeks after the end of treatment (T2) and mean improvement was measured using the Hamilton Scale for Depression scores using parameters of sleep and cortisol and melatonin levels.

The researchers conducted an intention-to-treat analysis that showed: