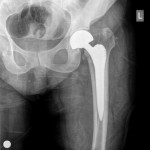 In December 2012 the American Academy of Orthopaedic Surgeons and American Dental Association (ADA) reviewed the evidence of links between dental procedures and developing a prosthetic joint infection (PJI). At that time they recommended that:-

In 2014 the ADA convened a panel of experts to address the question;

Searches conducted for the 2012 review were updated.   New studies identified together with all article reviewed at full-test stage of the 2012 review were considered. All studies were screened independently and in duplicate and studies were critically appraised. The expert panel approved the clinical recommendation and it was peer reviewed before being finalised and approved by the ADA Council on Scientific Affairs.

Evidence fails to demonstrate an association between dental procedures and PJI or any effectiveness for antibiotic prophylaxis. Given this information in conjunction with the potential harm from antibiotic use, using antibiotics before dental procedures is not recommended to prevent PJI. Additional case- control studies are needed to increase the level of certainty in the evidence to a level higher than moderate.

This update of the 2012 joint guideline has only been developed by the ADA, although consultation has included other stakeholders, including for example, Infectious disease experts, pharmacists and orthopaedic surgeons. The guideline is based on 4 case-control studies, which are more prone to bias and confounding. The studies adjusted for a range of confounders that varied from study to study and there was also marked variation in how accurately exposure (to dental treatment) was measured. Overall the expert group determined that the level of certainty was moderate using the ADA’s criteria. However, these may not be fully consistent with the GRADE criteria, which should be considered.