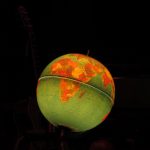 Maybe you’ve heard… there’s a treatment gap in mental health. A lot of people in the world need treatment, but don’t get it. Limited public mental health investment is a problem, and common sense seems to tell us that it’s also not sensible in economic terms. Mental health problems limit individuals’ productivity, and therefore that of the economy as a whole. One study produced a figure of up to $8.5 trillion in lost output for 2010 alone.

And yet the gap persists. This isn’t due to a lack of evidence to support investment in mental health – we’ve got plenty of that – but clearly we still haven’t reached a tipping point for global action. And global it needs to be; high-income countries spend around $50/person/year on treatment and prevention of mental disorders, compared with less than $2 in most low- and middle-income countries.

So despite the wealth of evidence supporting investment in mental health care, it’s good to see a recent study in The Lancet Psychiatry reporting on a “global return on investment analysis” (Chisholm et al, 2016). The idea behind this study is to estimate the value of ‘scaling-up’ treatment for depression and anxiety; that is, increasing coverage. So it isn’t designed to estimate the cost-effectiveness of a single intervention in a single setting, but the global economic impact of increased investment. Maybe this is what we need in order to convince policy makers? 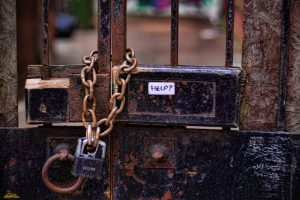 The analysis is based on a computer simulation. Key features of the model are as follows: 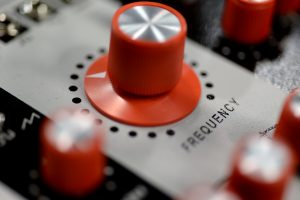 The authors also adjusted their model to test pessimistic and optimistic scenarios.

A model like this produces big numbers. It predicts that without new intervention, 12 billion days of lost productivity will be accrued (due to anxiety and depression) in the 36 countries each year. That’s 50 million years of work… each year. The estimated cost of this is $925 billion per year. Extrapolated globally, this comes to $1.15 trillion.

Meanwhile, the total cost of scaling-up is estimated to be $91 billion for depression and $56 billion for anxiety. On a per-person basis, the average cost of the investment comes to just $0.08 in low-income countries and $3.89 in high-income countries.

The model predicts that the increased treatment coverage would reduce prevalence by increasing recovery, which may seem a little at-odds with current evidence. This translates into 73 million fewer cases of depression and 45 millions fewer cases of anxiety disorder. The gain in healthy life-years is 43 million.

I’ve included below a figure from the article, which says it all about the main findings. The top 2 graphs only include economic benefits, ignoring any value that people might attach to improved health. A point above 1 means that increasing treatment coverage pays for itself. So, looking at the first (top-left) point showing the economic benefits of scaling up depression treatment in low-income countries, for every dollar spent we would expect to get $2.30 back. 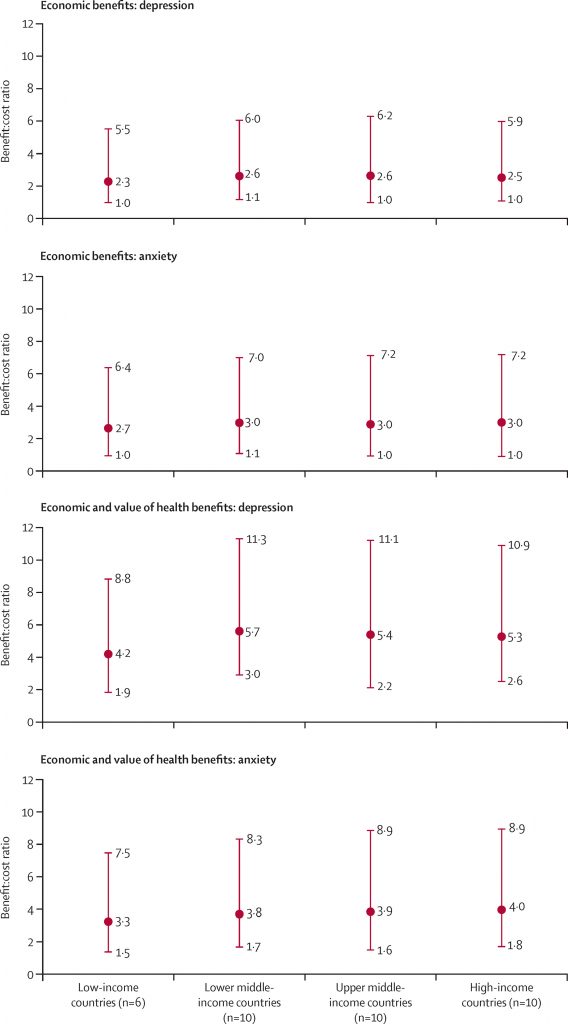 Treatment of common mental disorders leads to improvements in economic production and health outcomes. Clinicians should increase the detection and management of people with depression and anxiety disorders.

This is a modelling study, so there is no shortage of limitations. The authors provide a good discussion of a lot of the issues. Most fundamentally, the authors are trying to predict the future. In reality, anything could happen between now and 2030. Somebody might discover a cure for depression. The world might transition to a post-capitalist utopia. But there’s not much we can do about that.

There may come a time when we can judge the accuracy of this model with hindsight, but for now we just have to try and figure out if it’s valid based on what we currently know. Much of it comes down to what can and cannot be built into the model. And there are some important determinants of either the costs of scaling-up treatment or of the health and economic benefits that are not included, such as:

So, the findings might be wrong. But that wouldn’t be a helpful conclusion. It’s more important to consider whether they overestimate the return on investment or underestimate it. Given the limitations I would be more inclined to suggest that the model underestimates the likely benefits of scaling-up treatment. 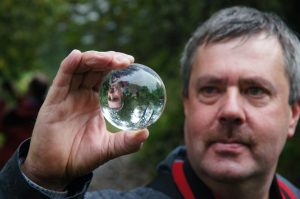 It’s important that we try to predict the future to inform resource allocation. But it’s also important to understand the limitations.

A big part of whether you believe this study’s findings is whether you believe the population, prevalence and epidemiological projections that depend on UN and Global Burden of Disease estimates. I’d say they’re the best we’ve got, so this is an important study that will play a central role in future debate about investment in mental health.

A key bit of context for this study is the UN’s 2015-2030 Sustainable Development Goals. Other cases for investment in this context have also been considered. While the benefit to cost ratio for scaling up treatment for depression and anxiety might be about 3:1, the return on investment in malaria might be 10 times higher. This study doesn’t put mental health ‘in the lead’ in the competition for health investment, but it does clearly demonstrate the potentially huge cost of spending too little.