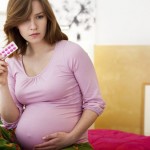 Approximately 1 in 10 new mothers are prone to depression1, with suicide a leading cause of maternal death2 in the UK.  Postnatal depression can increase the risk of the child developing depression. The long-term consequences of antidepressants in pregnancy are unclear, and difficult to study. Treating depression in pregnancy is important, but prescribing in pregnancy is tricky and there is limited evidence to guide clinical decision making.

The British Journal of Psychiatry has published three papers about prescribing selective serotonin re-uptake inhibitor (SSRI) antidepressants in pregnancy; an original research paper4 and two invited commentaries5, 6. This blog is principally about the original research paper by El Marroun and colleagues4, but the commentaries provide interesting perspectives on the findings.

The research paper4 is a prospective study within a population-based cohort in the Netherlands called the Generation R study7. This study examined three groups of children: ‘Exposed to depression group’ vs. the reference group:

The ‘exposed to SSRI group’ vs. the reference group: There is no evidence of a difference of the risk of pervasive developmental problems between the ‘exposed to depression’ and ‘exposed to SSRI’ groups.

So, what should clinicians and mums-to-be make of these findings? IAPT prioritises pregnant women, but it can still take a long time to get therapy, which may for some be too late.