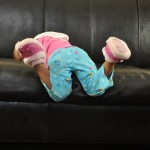 Disruptive behaviour problems (DPB) such as conduct problems or being oppositional and defiant affect a large proportion of young children. For example, one in eleven pre-schoolers may show these behaviours to a degree that would warrant a formal diagnosis of disruptive behaviour disorder. Because these early ‘externalising’ behavioural problems are stable across time, and eventually come to predict negative outcomes such as future criminal behaviour, dysfunctional families and psychiatric problems, intervening early is crucial.

While this need for effective early interventions is well recognised, it appears that in recent years, psychotropic medication is being used more and more for outpatient care of these problems. The authors note an increasing use of antipsychotic medication, medication used primarily to treat psychotic symptoms (delusions, hallucinations, disordered thought). This is worrying because: In contrast, the use of psychosocial treatments, despite being the recommended ‘first line’ treatment for young children with DPB has significantly decreased in recent years.

Studies published before January 1, 2012 that satisfied seven criteria were included:

Several strategies were used to identify studies; 36 were included in the final meta-analysis. These studies were then coded for study methodology, treatment, and child variables. Coders were ‘‘trained-to-criterion’’ (i.e., they showed 80%or greater reliability on all codings). Thirty-six studies that evaluated 3,042 children met study criteria and were included in the meta-analysis.

Overall, psychosocial treatments had a large effect on early disruptive behaviour problems (Hedges’ g = 0.82, SE = 0.10, 95% CI = .63–1.01, z = 8.63, p < .0001). This result was highly robust against the file-drawer effect (the probability that unpublished null findings would eliminate the obtained results). However, there was considerable heterogeneity in the magnitude of effects across studies, suggesting that it was important to examine study variables and individual characteristics that might increase or decrease effect sizes.

Breaking down DPBs into different symptom types, general externalising symptoms showed the largest response, followed by oppositionality/noncompliance. Symptoms of impulsivity and hyperactivity showed the weakest treatment response relative to the other symptom classes, although the magnitude of effect on impulsivity/noncompliance still fell in the medium range.

Whereas behavioural treatments collectively demonstrated a large effect on disruptive behavior symptoms, non-behavioural treatments (e.g., family systems approaches, nondirective counselling) demonstrated only small to medium effects. Treatment length did not moderate response. Nor did it matter whether or not treatment was delivered in groups or involved children directly. Treatments showed larger effects in samples of older youth, and with higher percentages of males but were consistent across racial and ethnic groups. Psychosocial treatment options collectively demonstrate a large and sustained effect on early disruptive behaviour problems, supporting consensus guidelines that these should be used in the first instance before medication.

The largest effects were found for behavioural treatments. These include packages such as:

Despite the support for these interventions, there appears to be a gap in service provision of these programmes. This may reflect inadequate numbers of professionals with appropriate training. The paper calls for wider dissemination of these programmes but also more inventive methods of delivery that use new technology such as secure video conferencing.

These findings are limited in several ways. First, these conclusions are based mainly on behavioural interventions that target parenting behaviours; other psychosocial interventions such as school-based approaches have received little empirical attention but are likely to be an important aspect in the reduction of early DBPs. Second, limited data meant that a number of other important moderators such as comorbidity, parent psychopathology, treatment adherence, and therapist competence could not be investigated. Third, it is possible that the lack of significant effects associated with non-behavioural treatments was due to the smaller proportion of trials (11.1%) that specifically evaluated these.