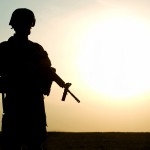 A cohort study published in JAMA tried to answer the question what are the risk factors for suicide in the US military.

This is a hot topic as the rate of suicide has increased in US military personnel from about 11/100,000 people in 2005 to about 18/100,000 so that now deaths from suicide outnumber deaths from combat.

What the authors did was to gather together three cohorts in 2000, 2003 and 2006. Importantly they included reservists as well as full time members of the military (reservists make up about 30% of the US army which is relatively high compared to other countries). Participants were asked to complete a baseline questionnaire and then a questionnaire every three years. About a third of people approached agreed to take part in the study and they were more likely to be women, younger and college educated than the typical US military population. Death, the main outcome, was assessed from the National Death Index and the Department of Defense Medical Mortality Registry. The authors were particularly interested in whether deployment and combat experience were linked to suicide, having gathered information about this from records and surveys.  The questionnaires completed by the participants assessed various other factors such as stressful life events; post-traumatic stress disorder; depression and drinking (although they didn’t ask about other drug use which seems a significant omission).

What they found in the 151,000 participants is that 83 people died as a result of suicide between 2001 and 2008 which gives a crude rate of 11.73 (95% confidence interval 9.21-14.26) per 100,000. What is more important is not the crude rate (as the authors didn’t set out to establish what the “true” rate was in the US military) but the risk factors associated with suicides. They found that suicide was highest in those with bipolar disorder, depression and alcohol problems. There was no link with deployment or combat exposure – in fact those who were not deployed had higher crude rates of suicide than those deployed once. One way of expressing risk is to report the population attributable risk which tells you how much the rate of a disorder would reduce if you got rid of the risk factor.  (This is useful as it takes into account how common the risk factor is and how much it increases the risk – if a risk factor is rare then from a population perspective how much it increases your risk is relatively unimportant).  In this study the population attributable risk for alcohol related problems was 18%, depression 11% and bipolar disorder 5%.

So in this population, as in most risk factor studies, it was the usual suspects of depression and substance use that was associated with suicide. There are some caveats here though. In this study there were only 83 suicides so there were wide confidence interval intervals in the hazard ratios. There is also the possibility of the healthy deployment issue – those personnel who were unwell or had substance abuse problems may have been less likely to have been deployed or see combat.  The study also only covers only 2005 to 2008 when the increase in suicides was beginning. It will be interesting to see if later data supports these initial conclusions. However, the study does beg the question of whether there was something “depressogenic” about being in the US military. The population of the US military is generally younger than other high income country armies and deployment when it occurs is longer than other countries with shorter breaks “at home”. Personal testimony from serving and recently retired soldiers also contributes to a view that invading and occupying small defenceless countries far away from the US can affect morale. However, this argument also applies to armies from other countries such as Canada and the UK where there has not been such an increase in military suicides.

Another argument to explain these findings is that the response to mental illness in the military is problematic. We know from the civilian population that identifying and responding to depression in primary care is one of the best ways of reducing suicides. As the authors note mental health problems in the military increase risk of suicide – just as in civilian life – but the response is often different with a much greater reluctance to divulge mental health problems.  This might explain why alcohol abuse – often used to self-medicate psychiatric disorders – was the most important risk factor in this study.