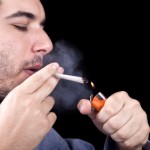 Using cannabis can lead to a loss of brain volume in people who are at risk of developing schizophrenia, according to a study published in the November issue of the British Journal of Psychiatry.

The finding by researchers from the University of Edinburgh could be important in understanding more fully the link between cannabis use and the development of schizophrenia.

Previous studies have found that the brains of people with schizophrenia show structural abnormalities, particularly in a part of the brain called the thalamus. We each have two thalami (the left and the right) which are responsible for processing and relaying information.

The team studied 57 people aged between 16 and 25 who were well but who had a strong family history of schizophrenia and were therefore at high genetic risk of the disease. Each person had a full assessment including a magnetic resonance imaging (MRI) scan. Two years later, each person returned for another MRI scan. As part of this second assessment, they were asked about their use of illicit drugs (including cannabis), alcohol and tobacco in the period between scans.

Some of the participants who used cannabis had also used other drugs, such as ecstasy and amphetamines. However, the results remained significant after controlling for this.

Our study demonstrates that cannabis use by people with a family history of schizophrenia is associated with thalamic volume loss. This raises the possibility that when used by people already at elevated genetic risk of the condition, cannabis may increase the likelihood of brain abnormalities associated with schizophrenia developing. This may facilitate our understanding of how cannabis use can lead to a worsening of previously subtle symptoms and ultimately increase the risk of transition to schizophrenia.