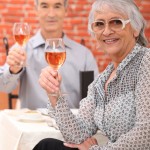 We know a lot about the health consequences of drinking too much alcohol, but most of this research comes from studies of adults in their twenties, thirties and forties. But what about older adults? The European project VINTAGE reviewed and synthesised the available evidence relating to alcohol consumption in older people across many European countries. This project has now been published in two papers, one describing the methodology in detail, and the other summarizing the findings.

You might ask why we should be particularly concerned about alcohol consumption in older people. There are several reasons. Firstly, we know that when older people drink alcohol, their blood alcohol content rises more quickly and peaks at a higher rate, compared to younger people. The elderly may also show reduced tolerance to the effects of alcohol. Secondly, the authors make the point that the current generation of ‘baby boomers’ (those born in the years after the end of the Second World War) have more favourable attitudes to drinking, and more disposable income, than previous generations.  Both of these things are likely to be linked to increased consumption of alcohol. More generally, as life expectancy continues to increase and the proportion of elderly people making up the population of the European Union continues to rise, it is very important that we understand the influence of alcohol consumption on the health of older people.

This team of researchers from a number of European countries searched the research literature for articles that examined alcohol consumption in older adults, and assessed the consequences of drinking for health and well-being. The focus was on alcohol consumption in the general population, it is not a review of medical complications arising from alcohol dependence in older people. They only included systematic reviews or original research papers that had not been included in a previous systematic review, so this paper was a review of reviews. They then completed a narrative review, with some meta-analyses, based on a total of 78 papers. Older people with low to moderate alcohol consumption have improved general health, well-being and cognitive function, relative to those who drink heavily, or abstainers

for those who do drink, there is certainly no evidence that those who consume 20g alcohol per day are any worse or any better off than those who drink less. Of course, this may just mean that those who are healthier, wealthier and better socially adjusted are more likely to be light drinkers than abstainers or heavy drinkers

It is important to note that the authors reported a mix of meta-analyses and narrative reviews of the literature. For example, when discussing the link between alcohol use and some types of injuries, they reported that five of the available studies found a statistically significant association whereas the remaining five studies did not. If a meta-analysis had been conducted, this would have revealed the ‘bigger picture’ (for example, it might show a small but robust association between alcohol use and injuries).

The authors conclude by acknowledging that cumulative alcohol exposure over the lifetime is likely to be strongly associated with poor health, particularly as people get older. So even if somebody doesn’t drink very much at the moment, if they were a heavy drinker for most of their life then problems may be brewing.