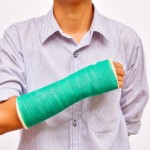 If you’ve ever been laid up in a plaster cast, you will know how frustrating and painful a fracture can be. For us elves there is the added complication of making plaster casts small enough, and trying to keep them clean and dry in the woodland.

For some people the risk of fractures is greatly increased, and this risk generally increases with age. Osteoporosis is a common condition of greater than normal rates of bone loss, and the degradation of some of the internal structuring and scaffolding of the bones. This leads to a higher risk of fractures and all of the associated complications in terms of morbidity and mortality.

People with schizophrenia have long been thought to be at increased risk of osteoporosis and its precursors; osteopaenia and low bone density. However, as with many of these types of studies research is lacking, or lagging behind other areas. Putative mechanisms for this are:

Two recent population studies have shown that people with schizophrenia are at higher risk of hip fractures, and had worse long term outcomes than controls (Howard, 2007; Sørensen, 2013). All of this has prompted the current study, a meta-analysis by Stubbs et al, which examines overall bone density in more detail. Osteoporosis affects around 3 million people in the UK.

Stubbs and his colleagues undertook a systematic review of the literature pertaining to schizophrenia and low bone mass, using the usually recognised guidelines (MOOSE and PRISMA in this case). Using the usual on-line sources and databases, they searched for the terms “(osteoporosis or osteopenia or osteo* or bone mineral density or DXA or DEXA or bone) AND (schizophrenia or schizo* or psychosis).” From this, they included articles in any language which measured bone density in patients with a diagnosis of schizophrenia, although some also included small numbers of patients with schizoaffective disorder. They looked ideally for a clear measure of bone density coming from dual-energy X-ray absorptiometry (DXA) scan results or from quantitative ultrasound (QUS). Because they anticipated the groups and studies to vary considerably (high heterogeneity) they adjusted their statistical methods to account for this.

Data was then taken from each study by two of the authors independently on the following domains:

Overall the authors used a robust and recognised method to gather the data necessary for their study. The main difficulties in applying this were that only a small number of studies were found, and these studies varied from one another considerably. There is a danger where this happens in that the subsequent analyses lead to multiple different comparisons of sub-sets of the data. In this case they took the above factors and compared each of the three disease states (osteoporosis, osteopaenia and low bone density) for each one. With so many comparisons it is possible that findings due to chance alone slip by, depending on the level of statistical significance reached. Indeed the authors later comment that some of the associations initially made lost statistical significance once a Bonferroni correction was applied.

What they found were 19 suitable studies (out of an initial 529 identified) reporting on 3,038 patients with a diagnosis of schizophrenia compared with 1,531 controls (only 8 studies included had control groups). The authors looked at the results for each illness state separately and then looked at the studies where patients were compared to controls. This meta-analysis by Stubbs et al finds two and a half times risk of osteoporosis in those with schizophrenia.

These findings add to the established literature and show that one in two people with schizophrenia will have low bone mass, almost twice the rates of their age and gender matched peers.

The authors comment that the low number of studies suggests that this has so far been an under-researched area, and more work is needed. They draw attention to some of the limitations of their study (the low numbers, inconsistent findings regarding the risk factors) and accept that there is inconclusive data to determine the putative mechanisms by which those with schizophrenia develop problems more frequently.

Further work is always needed, and particularly here where the number of studies is relatively small and shows inconsistent results. Stubbs and his colleagues have helped to raise the profile of this problem for those with schizophrenia, allowing clinicians and patients alike to make better choices to reduce their chances of low bone density leading to falls and fractures. With a two-fold risk of low bone density, should we be more proactive in screening patients with schizophrenia?

Last reply was October 7, 2014
Try out our members features!