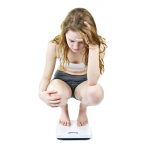 Eating disorders are chronic conditions associated with high mortality and morbidity as highlighted by a previous Mental Elf blog in 2011.

Using ICD 10 criteria, EDNOS includes atypical AN and atypical BN as well as “eating disorder unspecified” and there seems to be less published research into this group than AN and BN.

A register-based study published earlier this year in BMJ Open had 3 clear objectives:

The data was collected from the General Practice Research Database, a database compiled from around 400 representative UK practices. From this database, the team looked at new diagnoses within a 10 year period (between 1 January 2000 and 31 December 2009) of AN, BN or EDNOS in male and female patients aged between 10-49 years. Patients who had a diagnoses of both AN and BN were assigned to the correct group using a diagnostic algorithm that measured BMI and symptoms at presentation.

The bottom line of the study was that in both male and female patients, the overall incidence of eating disorders increased between 2000 and 2009. According to this study, EDNOS (Eating Disorders Not Otherwise Specified) have become the most common type of eating disorder in UK men and women

Interestingly, for both males and females, a statistically significant increase was seen in EDNOS, whereas incidence of AN and BN stayed roughly the same throughout the period. EDNOS was the most commonly diagnosed ED in males throughout the study period. In females, at the start of the study period BN was more common but now this has been overtaken by EDNOS.

One of the strengths of this study lies in the fact that it is primary care based, thereby avoiding a referral bias. However this still relies on the fact that the case has been “detected” and the authors do comment on the likelihood of large numbers of cases in the community without diagnoses. So, the figures given in the research are likely to be an underestimate of the true incidence in the UK population. As discussed by the authors, it is impossible to say from this study whether the results show a true increase in the number of people suffering from EDNOS or whether this is due to better detection rates as clinicians have a greater awareness of atypical eating disorders.

Future research should clarify whether the increase seen in this study reflects a true community increase or better detection. Our findings have important implications for public health, healthcare provision and understanding the development of EDs.