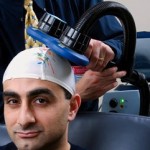 Transcranial Magnetic Stimulation (TMS) is a treatment where magnetic coils are placed above the scalp and used to generate magnetic fields, which create short-lasting electrical currents in the brain below the stimulation site.  TMS is used to treat a number of health conditions including depression.

This meta-analysis conducted by researchers at Oxford University presents an up-to-date overview of randomised sham-controlled trials of TMS in the treatment of depression.  The researchers searched Medline and Embase for studies where patients and investigators were blinded to treatment, and outcomes were measured using a version of the Hamilton Depression Rating Scale (or similar scale).  They found 1,789 studies between 1996 and 2008 and included 31 with a total of 1,531 patients (815 receiving TMS and 716 receiving sham TMS courses).

Here are the results of the meta-analysis:

Transcranial Magnetic Stimulation (TMS) appears to be an effective treatment; however, at 4 weeks’ follow-up after TMS, there had been no further change in depression severity. Problems with finding a suitably blind and ineffective placebo condition may have confounded the published effect sizes. If the TMS effect is specific, only further large double-blind randomized controlled designs with systematic exploration of treatment and patient parameters will help to define optimum treatment indications and regimen.

Last reply was September 13, 2011
Try out our members features!