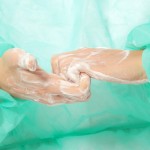 Hospitals are supposed to make people better, not worse – so hospital-acquired infections are always a big topic.

Clostridium difficile infection (CDI) is the most commonly diagnosed cause of antibiotic-associated diarrhoea, and causes more than 7,000 deaths each year in the US alone. There have been studies into risk factors for CDI, one of them suggesting a link between antidepressant medication and an increased likelihood of contracting the disease. There is also some evidence that depression affects the microbiota in the gut, making people more susceptible to gastrointestinal diseases such as inflammatory bowel disease and colitis.

Following on from this evidence, the authors of this paper planned a study into finding out whether depression or use of antidepressants increases the risk of CDI. The authors used two approaches; a retrospective data analysis and an observational study; so the paper is effectively about two studies. All research took place in the US. Clostridium difficile (C. difficile) are anaerobic bacteria. This means they do not need oxygen to survive and multiply

Study 1 consisted of data analysis to determine population rates of CDI in individuals with and without depression. The data came from the nationally representative Health and Retirement Study (HRS) – a study of the health and lifestyles of older Americans. More information on this survey is available online from the University of Michigan (see also links). Data used were from the HRS database from 1992-2006. The authors extracted information from this on rates of depression and depressive disorders, demographics, and diseases of the gut among participants.

The authors also calculated the number of infection-related medical visits from the total number of medical visits and the information they had on the health status of the participant. The number of infection-related visits was used as crude proxy for antibiotic exposure. The researchers then performed statistical analyses on the data for rates of CDI for people with and without major depression, and calculated the association between depression and CDI.

Study 2 was a hospital-based case-control study to evaluate the association between antidepressant use and hospital-acquired CDI. Subjects were patients in hospitals in the University of Michigan Health System, aged 18 and over, data were collected over a period of two years between August 2010 and February 2012. Cases were patients who tested positive for CDI at 48h or longer after hospital admission, controls were those who tested negative. Data on comorbidities and medications of subjects were taken from the hospital data system. Various statistical tests were conducted to assess the association between antidepressant use and CDI. There was also a case-crossover study in which each patient served as their own control to evaluate differences in antidepressants. The researchers claim that this could be used to separate the effects of antidepressant medication from the effects of depression itself. The authors had access to 16,781 participant records from the HRS database. The mean age of participants was 67.9 years, 56.2% were women. The majority were overweight or obese. There were 404 people who had been diagnosed with CDI, of those 404, there were 142 who had been diagnosed with a depressive disorder prior to their CDI diagnosis. The rate of CDI was 282.9 per 100,000 person-years in those with depression, and 197.1 per 100,000 person-years in those without depression.

After adjusting for comorbidities, demographic characteristics and frequency of medical visits, the researchers found there was a 36% increase in the odds of developing CDI for people with major depression compared to those without. Similar odds ratios were found for other depressive disorders and issues linked to depression (feelings of sadness, having emotional, nervous or psychiatric problems). There was also an association between being widowed and developing CDI (54% greater odds than for married participants), and between living alone and developing CDI (25% greater risk). The study found a link between CDI and some antidepressants (mirtazapine, fluoxetine and nortryptiline)

The sub-study, in which 406 patients served as their own controls, this interaction between tradozone and mirtazapine carried increased risk of CDI infection as well. However, the researchers state that the risk from this was negligible, since this combination of drugs was only present in 1.25% of hospitalisations.

Personally, I wonder whether combining the two studies in the way it was done was a valid design. The difference in population used in the two studies seems significant: The HRS is a survey of older Americans only, so even though it’s nationally representative, it is such only for that age group. The participants of the second study ranged in age from 18 to 100, with a mean age around 10 years below the mean age of HRS participants.

The authors concluded that there is a link between depression and CDI, and that there are certain antidepressants that increase the risk of developing CDI. However, they go on to state that it wasn’t possible to separate the effects of antidepressant medication from the effects of depression on the gut. The results from the case-crossover study in which participants served as their own controls seem inconclusive in this respect.

The take-home message seems to be that clinicians should be careful with prescribing antibiotics to older adults with depression and/or taking antidepressants, as this population may be at greater risk of developing CDI than the general population.