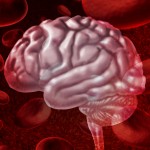 Depression is a serious mental health threat proclaimed to be the greatest disease burden in the industrialised world by 2020 (Simon, 2003). In the pharmaceutical combat against depression, selective serotonin reuptake inhibitors (SSRIs) are the current treatment of choice. Indeed, SSRIs are the most prescribed antidepressant medicine (Helms & Eric, 2006). As the name suggests, they increase brain serotonin by blocking its reuptake from the synaptic cleft.

Beside concerns about low efficacy and untoward side effects, there is some evidence linking SSRIs to increased occurrences of internal bleeding (Lee et al., 2012). This new meta-analysis by Hackam and Mrkobrada (2012) reviewed data on the association of SSRIs and brain haemorrhages and tried to come to a more definite conclusion.

Four types of hemorrhages were assessed:

In total, 16 studies with 506,441 participants met the inclusion criteria. Covariates and other possible confounders in the primary studies were reported and no publication bias was found.

Fixed effect rate ratios with 95% confidence intervals were reported. As three studies merely contained unadjusted rate ratios, the listed results below will be restricted to these. Therefore, practitioners are advised to:

The reviewed studies show great variation in terms of sample sizes. Because data are pooled, this could lead to over-/underrepresentation and statistical effect skewing. For instance, more than half of all data on intracerebral haemorrhages was provided by one study.

What is more, definition of relevant comorbidities (e.g. hypertension) varied somewhat among primary studies, making comparison difficult. Unfortunately, Hackam and Mrkobrada fail to underline each result with its respective p value. Of course, 5% significance level is implicitly assumed, but p values would have been helpful for a more complete overview.

Also, assessment of primary study quality is lacking. This is especially disadvantageous, as the meta-analysis aggregates observational (i.e. non-randomized and non-blinded) studies without effective placebo control. The absolute risk of haemorrhage remains extremely low, whether you are taking SSRIs or not.

Even though there are some inconsistencies among primary studies, this meta-analysis hints at increased risks of cerebral bleeding under SSRI regimen. Further controlled research is necessary to draw more definite conclusions. Because the incidence of cerebral bleeding is (fortunately) very low in the first place (24.6/100,000), SSRIs might exacerbate risk ratios, while absolute increases remain minimal.