Home » Posts » Mental health » dementia » Which (if any) drugs should we use for agitated or aggressive behaviour in dementia? 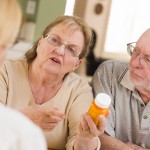 This is a dilemma I frequently face when I am called out to see someone with dementia on the ward or living in a nursing home. On the one hand I am thinking that anything I use can potentially have serious side-effects and will probably lead to increased health risks and increased mortality. On the other hand I have a very distressed person and a very distressed group of caregivers. I know that very soon the situation will be unsustainable if I do nothing and I just rely on the carers’ coping skills.

Screen for pain and delirium—I hear you say. You are right, of course. There have been a number of reviews looking into exactly that issue that show that this should be the first course of action (Cohen-Mansfield and Mintzer, 2005; Sink et al., 2005). Interpersonal and environmental factors can also play a role and should be ruled out (Sink et al., 2005).

Eight in 10 people with dementia will have neuropsychiatric symptoms (Zuidema et al., 2007; Seitz et al. 2010) which means contemplating using medication in quite a few cases. Do no harm, right? Clearly, the question we need to answer is: What is the most effective, least harmful medication, for agitated or aggressive people with dementia? What is the most effective, least harmful medication, for agitated or aggressive people with dementia?

Dallas Seitz from Geriatric Psychiatry Services, Providence Care – Mental Health Service in Ontario, Canada, and colleagues have published a review to try to answer that question (Seitz et al. 2013). They looked through MEDLINE, EMBASE, PsychINFO, the Cochrane Library for randomised controlled trials comparing medications with either placebo or other interventions. They also used Google Scholar as an additional search tool. On top of this, they hand searched a number of local databases and looked through references in Canadian guidelines. They used the Cochrane Collaboration risk of bias tool to measure the quality of studies and they evaluated the efficacy of medication using neuropsychiatric symptom severity rating scales. They looked at trial withdrawals, trial withdrawals due to adverse events, and mortality as measures of safety.

Using this method they identified 7,310 potential articles, of which 315 full-text references were screened for eligibility yielding a total of 29 studies included in the final synthesis.

There were 3 studies on cholinesterase inhibitors, one on donepezil and 2 on rivastigmine. Unfortunately all the rivastigmine trials had antipsychotics as their controls. Table 2 summarises the results.

There were 4 studies on anticonvulsants, two on divalproex, one on carbamazepine and 1 on oxcarbamazepine.

There were no trials of antidepressants versus placebo in the review. The only trial found compares Sertraline to Haloperidol and finds no difference between the treatments in terms of benefits or adverse events.

Seven studies probing a variety of other drugs also made it into the review. The summary is on table 4 below.

Overall risperidone, olanzapine, and aripiprazole may be of benefit although the effect was small and not consistent across all trials.

There were additional single small positive studies with carbamazepine, estrogen, cyproterone acetate, propranolol, and prazosin. The effects sizes tended to be very small and only a few studies reported clinically relevant outcomes such as symptom remission. Trial withdrawals tended to be more frequent with those treatments that showed any efficacy. The antipsychotics risperidone, olanzapine, and aripiprazole were the most effective drugs, but effect sizes were small and inconsistent, and adverse effects were significant

The main limitations of the review were the use of only English-language studies and that many articles were sponsored by pharmaceutical companies. The paper had some strengths as well. They evaluated randomised controlled trials and they looked at long term care populations. The authors assessed study quality and identified potential sources of bias in the primary studies. It was also useful to have an analysis of the safety as well as the efficacy of the treatments.

What should I do after reading this to help my distressed patient and overwhelmed carers?

From reading this review it is clear that much remains unknown about the efficacy of these agents and also the need for direct comparisons between non-pharmacological and pharmacological interventions.

Brodaty, H. et al. (2003). A randomized placebo-controlled trial of risperidone for the treatment of aggression, agitation, and psychosis of dementia. Journal of Clinical Psychiatry, 64, 134–143.

Cohen-Mansfield, J., Thein, K., Marx, M. S. and Dakheel-Ali, D. (2012). What are the barriers to performing nonpharmacological interventions for behavioral symptoms in the nursing home? Journal of the American Medical Directors Association, 13, 400–405.

De Deyn, P. P. et al. (2004). Olanzapine versus placebo in the treatment of psychosis with or without associated behavioral disturbances in patients with Alzheimer’s disease. International Journal of Geriatric Psychiatry, 19, 115–126.

Sink, K. M.,Holden, K. F. and Yaffe, K. (2005). Pharmacological treatment of neuropsychiatric symptoms of dementia: a review of the evidence. Journal of the American Medical Association, 293, 596–608.

Tariot, P. N. et al. (1998). Efficacy and tolerability of carbamazepine for agitation and aggression in dementia. American Journal of Psychiatry, 155, 54–61.

Tariot, P. N. et al. (2001). A randomized, double-blind, placebo-controlled study of the efficacy and safety of donepezil in patients with Alzheimer’s disease in the nursing home setting. Journal of the American Geriatrics Society, 49, 1590–1599.

Verhey, F. R. J., Verkaaik,M. and Lousberg, R. (2006). Olanzapine versus haloperidol in the treatment of agitation in elderly patients with dementia: results of a randomized controlled double-blind trial. Dementia and Geriatric Cognitive Disorders, 21, 1–8.

Wang, L. Y. et al. (2009). Prazosin for the treatment of behavioral symptoms in patients with Alzheimer disease with agitation and aggression. American Journal of Geriatric Psychiatry, 17, 744– 751.

Last reply was January 17, 2017
Try out our members features!