Home » Posts » Mental health » dementia » When is it appropriate to prescribe antipsychotics to treat the behavioural and psychological symptoms of dementia? 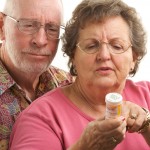 This topic has been well publicised in recent years and for good reason. We know that there is a huge disparity between the number of people with dementia who are prescribed antipsychotics (180,000 in England each year) and the number who may derive some benefit from the treatment (36,000). We also know that dangerous side effects are likely in this group with as many as 1,800 people at risk of death and 1,620 at risk of cerebrovascular events each year.

The Banerjee report (ref 2) was published in Nov 2009 and recognised these limited benefits and the NICE dementia guideline (ref 3) was updated in Mar 2011 to take the new findings into account.

This was followed by a report (ref 4) from the NHS Institute in Oct 2011, which looked at the economic alternatives to antipsychotics. It estimated that using behavioural interventions to treat individuals with dementia, rather than antipsychotic drugs, would cost an extra £27.6 million per year. However, health care savings would be nearly £70.4 million due to reduced incidence of stroke, falls, and drug savings. When these health care savings are combined with quality of life improvements, the net benefit of behavioural interventions was estimated at nearly £54.9 million per year.

Prescribing data does not suggest that the message is getting through to the front line. The overall trend in prescribing second generation antipsychotics has steadily risen over the last 5 years, although there are no figures yet for prescribing antipsychotics to people with dementia. The NHS Information Centre is currently conducting an audit (ref 5) of primary care prescribing that will be published later in 2012, so that should help fill this gap.

So, is there ever a place for prescribing antipsychotics to people with the behavioural and psychological symptoms of dementia?

Pharmacological interventions, including antipsychotics, have only a limited role in the management of non-cognitive symptoms of dementia. The NICE dementia quality standard states: