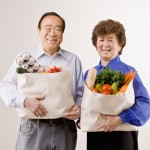 Dementia is a huge issue. As our population ages, the incidence of the disease is on the increase and attempts to prevent and treat the condition with drugs have not been as successful as we hoped.

A lot of effort has gone into investigating ways in which lifestyle factors such as diet can impact on risk and high quality research has shown us that fish has protective properties across different population groups (Issa et al).

Encouraging findings can be found in a new prospective cohort study published in the Journal of the American Geriatrics Society.  The study follows 1,081 Japanese people (aged 60+) over a 17 year period, to see if their intake of potassium, calcium and magnesium impacts on their risk of developing dementia.

The researchers ran a food questionnaire at the beginning of the study and divided the participants into four groups based on their dietary intake of the 3 studied minerals. People who consumed the least acted as the reference group.

Participants gave medical histories and were assessed for other illnesses such as diabetes and hypertension. General health questions were asked and the analyses were adjusted for age, sex and the other potential confounders measured.

The outcome of interest was dementia, which was diagnosed using DSM criteria, through annual health checks.

However, this is not a simple case of eating more potassium, calcium, and magnesium and being healthier. As usual, it’s a bit more complicated than that. The participants who consumed the highest quantities of the minerals also had twice the rate of diabetes, high cholesterol and fat intake and higher body mass index. It’s possible that the protection this group have from dementia is due to other factors and at the expense of other comorbidities such as diabetes.

Of course, the required levels of potassium, calcium, and magnesium can all be found in a healthy diet. Many older people take mineral supplements to ensure they are getting everything they need, but studies have shown that these can increase the risk of heart problems (cardiac arrhythmias), so they should only be used after due consideration of the fuller picture.

Last reply was January 17, 2022
Try out our members features!