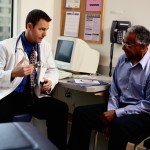 By clinical judgment, clinicians were able to identify 73.4% of people with dementia and 75.5% of those without dementia, but they only made correct annotations in medical records in 37.9% of cases (and 90.5% of non-cases).

GPs recognised only 44.7% of people with mild cognitive impairment. This was recorded in medical notes only 10.9% of the time. Their ability to identify healthy individuals without MCI was between 87.3% and 95.5% (detection specificity).

GPs have considerable difficulty identifying those with mild cognitive impairment and those with mild dementia and are generally poor at recording such diagnoses in medical records.