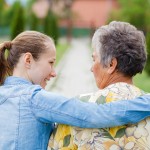 Social interaction is crucial to wellbeing (Scrutton & Creighton, 2015) but a series of observational studies over the past 20 years (for example, Burgio et al., 2001, Ward et al., 2008) have demonstrated that many people with dementia living in care homes have very limited opportunities to interact with other people.

Combined with the communication difficulties arising from their dementia, they often face a dual disadvantage. Improvements will be difficult to achieve without a deeper understanding of the factors promoting and hindering good communication with people with dementia.

This was the starting point for Australian research (Baker et al., 2015) which analysed conversations between care home staff and people with dementia. The data were collected as part of a larger study investigating memory and communication support strategies (Broughton et al., 2011). 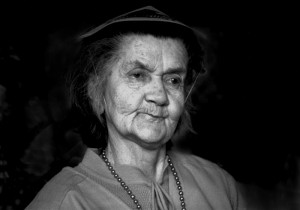 Many people with dementia living in care homes have very limited opportunities to interact with other people.

Understanding communication between residents and staff in care homes is not simply about knowing what words are said by whom. There are broader aspects such as speech tone, where and how conversations take place, and who initiates the topics that are discussed. The sociologist Harvey Sacks is generally credited with developing a set of methods for working with talk and social interaction known as conversation analysis (Moriarty, 2011). Central to this method is the concept of the ‘conversational turn’ which refers to the process by which people in a conversation decide who will speak next.

The method involves recording and transcribing conversations. However, the transcripts do not simply contain written text of what is said but are notated to record things like pauses, sighs, laughter, and overlapping speech where participants are talking at the same time (Hutchby & Wooffitt, 2008). This type of research does not generally look at non-verbal communication, such as facial expression, although this is clearly something that could be studied separately.

The conversations described in this study were based on recordings of talk between 20 people with dementia and 14 members of staff. They were recruited from three care homes in Queensland. Participants were asked to have a conversation about anything they wished. This produced 20 recordings, ranging in length from around five to 15 minutes. All but one of the people with dementia had moderate or severe cognitive impairment as measured by the well-established screening tool the Mini Mental State Examination (MMSE) (Folstein et al, 1975).

The researchers then notated the transcripts and analysed them using Discursis software, a computer-based visual text analytic tool for analysing human communication (Angus et al., 2012). The software identifies and tags recurrences of individual words between speakers to produce a plot of the conversation in which shaded red and blue blocks show the ‘turns’ made by each of the speakers and the strength of the match between them.

Unsurprisingly, the care staff talked considerably more than the people with dementia, with their words accounting for 70-84% of the total. However, in five conversations, discussion was shared more equally between participants. In a further five, the person with dementia spoke more than the care worker. Strikingly, many of the people with dementia had topics on which they were able to elaborate and to return to later in the conversation. This was usually something of personal relevance to them, such as their former occupation. Topics relating to family members and earlier domestic life also often led to engagement. General topics such as favourite flowers for a person not interested in gardening or discussions about recent events such as the food served for breakfast were less successful in generating conversations. 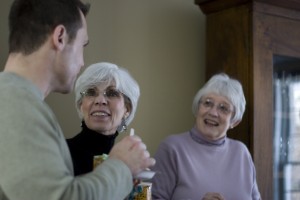 The authors argued that their results showed that it is possible to help people with dementia have more rewarding conversations both in terms of determining the topics discussed and playing a greater role in leading the conversational turns. The Discursis software produced visually striking examples where strategies in promoting interaction had been successful and where the results had been more mixed. The authors suggested these excerpts could be used in education programmes to help staff improve their communication behaviour.

There are signs that health care researchers are increasingly interested in analysing conversations with the aim of improving communication between practitioners and patients but this is a type of study that we rarely see in social care research. It is quite a technical paper in that the researchers needed to explain the way the software worked and how they interpreted the results. However, the actual extracts of conversations included in the paper repay close reading and will resonate with many practitioners who have observed differences in the ways that people with dementia engage with different topics of conversation and ways of communicating.

There are limitations. As the authors admit, the recorded conversations did not occur naturally. The care staff who volunteered to take part may have been those most confident in their ability to stage conversations and interested in improving their practice. However, this is a carefully conducted study that provides more evidence on this important topic.

Undertaking this type of research is resource intensive in terms of preparing and analysing the data. However, the rewards are considerable. Many of the findings – such as giving people with dementia extra time to listen to and respond to conversations will be familiar to practitioners. In this sense, this research is confirmatory rather than exploratory in providing strong evidence that communication difficulties for people with dementia can be exacerbated by the ways in which care staff communicate. This study suggests, as do others, that staff can be helped to communicate better. However, what may be key, is not creating these improvements in the first place, but ensuring they are sustained (Moriarty et al, 2010). 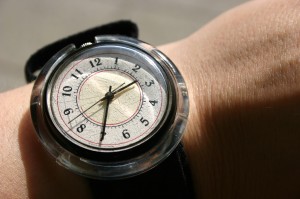 It’s vital to give people with dementia extra time to listen to and respond to conversations.